State of the Sector 2014: charities are disillusioned with politics and politicians

Our latest survey reveals how charities are struggling to adjust to change and insecurity. Stephen Cook looks at the figures

Disillusion with the government and with politics in general is one of the main findings of the latest State of the Sector survey, conducted every two years by Third Sector with the consultancy nfpSynergy.

The survey also reveals growing concern about the independence of the sector, low confidence in the self-regulation of fundraising and unease about the 40 per cent cut in the Charity Commission's budget. It indicates that the sector remains in a state of change and reorganisation, increasing its service provision while voluntary income holds up and income from local and national government continues to decline.

Disillusion about contracting with government featured strongly in comments made in response to a question about which government initiative you would most like. Twenty-two mentioned contracting problems, compared with 14 in the 2012 survey, which was a similar size.

On politics, nearly 40 per cent of 600 respondents said they had "no idea" which party had the best policies for the sector, and 23 per cent said "none of them". Twenty per cent chose Labour, 8 per cent the Greens, 5 per cent the Liberal Democrats and 4 per cent the Conservatives. 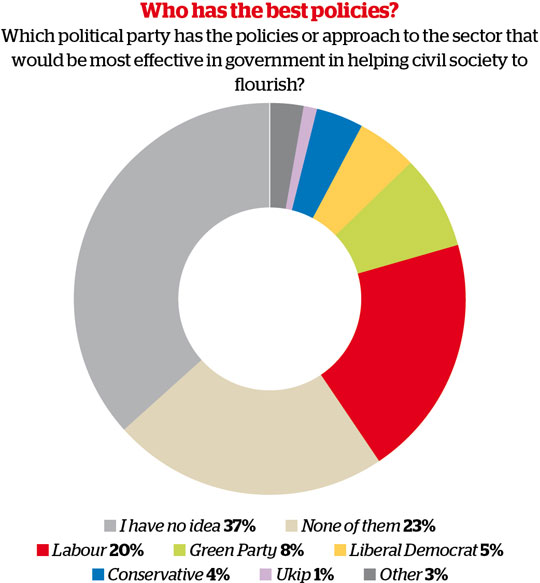 No more than 5 per cent agreed that the government had succeeded in the three principal aims stressed by the charities minister, Nick Hurd – getting more resources into the sector, making it easier to work with the state and making it easier to run a charity. 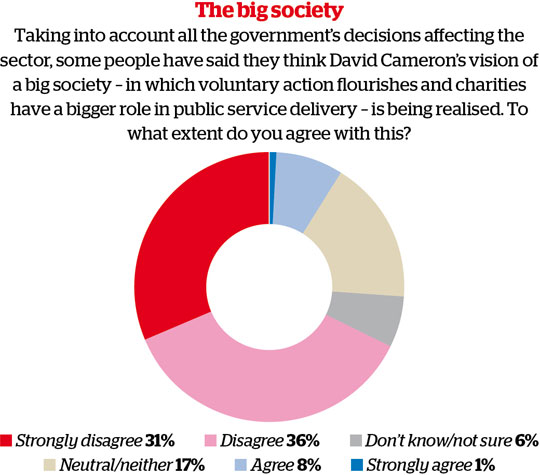 'We're not a cheap option'

Complaints about contracting with government dominated 280 responses to the question "what government initiative or policy change would you like to see that would make a positive difference to your organisation?"

Twenty-two mentioned contracting, compared with 14 in 2012, when the list was topped by irrecoverable VAT (30) and problems with Gift Aid (15). This year, VAT and Gift Aid were second and third, with 11 and 10 mentions respectively.

Nine protested about the lobbying act and the same number about support for sector infrastructure. Eight were unhappy about cuts to local council spending, seven called for better funding systems for the sector generally and six for more support for front-line services by charities.

One respondent said: "I would like to see politicians spend less time attacking and smearing charities." Another said: "They should treat charities fairly rather than as a cheap option for delivering services, and stop trying to turn us into another version of the private sector."

A third respondent said: "Fewer initiatives, please, especially those led by political egos, and more stability." And a fourth said: "Make the big society a reality rather than a slogan."

Only the Gift Aid Small Donations Scheme and inheritance tax concessions were felt by respondents to have a significant impact for the better on their charity. On the other 13 policies, the combined figures for "no impact", "don't know" and "too early to tell" amounted to about 90 per cent. 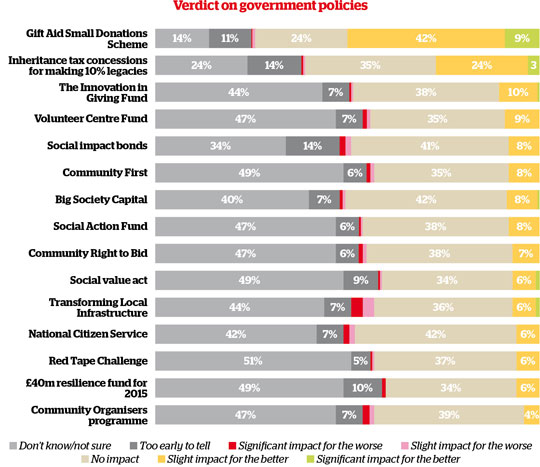 Joe Saxton, head of nfpSynergy, says: "The conclusion is that the sector seems impervious to government activities. The highest-scoring government initiative was the Gift Aid Small Donations Scheme, and we know in practice that has not performed as well as expected."

Responses on the operations of charities show a polarised picture, with some improvement in voluntary income and a huge amount of change. Forty-two per cent said their overall income was increasing; 39 per cent said it was falling. Two years ago, these figures were 30 per cent and 48 per cent. 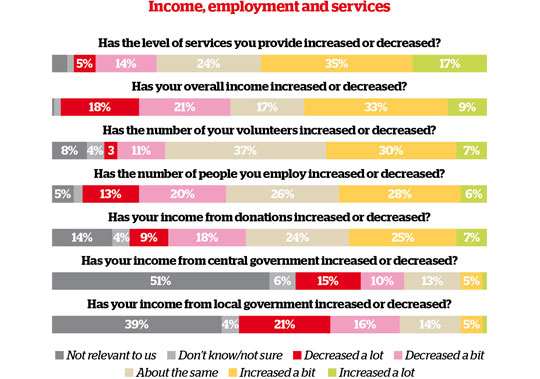 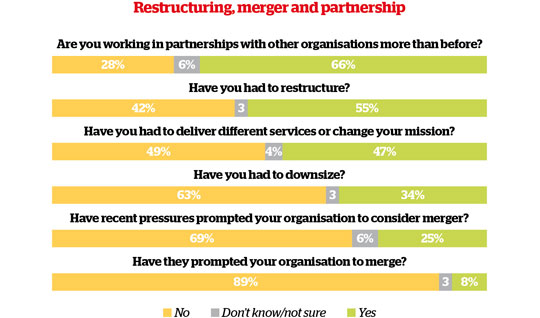 The first four of the biggest challenges facing charities are the same as two years ago, but sorting out back-office functions and managing reputation and brand have pushed obtaining funding from government and keeping a high quality of staff out of the next two places.

The top five places in attributes needed for success are occupied by the same subjects as in 2012. The top two missing skills – fundraising and digital media – are also the same as two years ago, but this year strategic planning has moved up from fifth to third place, and is followed by entrepreneurial or commercial flair (a new category) and information technology. Two years ago, external communications and marketing were fourth and fifth. 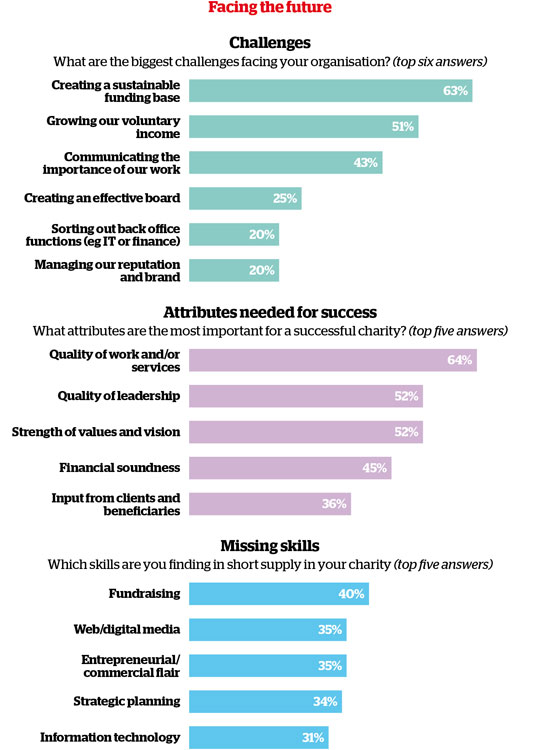 On the fund's influence on the way the sector works, the "don't know" element grew; but the proportion saying it was not independent of government was twice that saying it was.

Responses on the Charity Commission revealed strong concern (67 per cent) about its 40 per cent funding cut. The majority (54 per cent) agreed that it had been a weak regulator, and 36 per cent thought it was now being stronger. 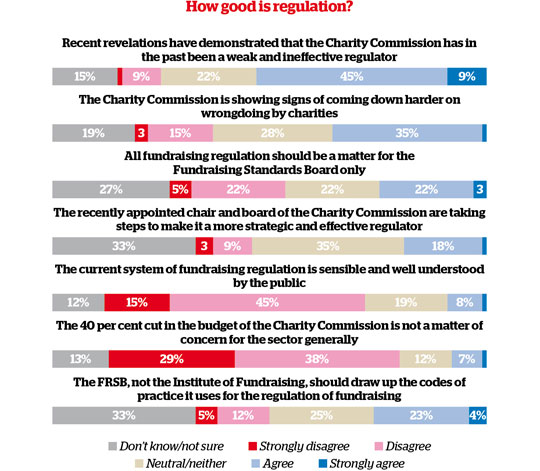 On fundraising self-regulation, responses reflected the current debate and uncertainty. Only 9 per cent thought the system was sensible and well understood; 60 per disagreed. 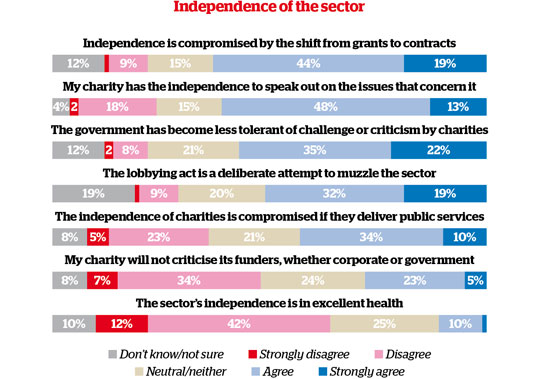 On big issues, a massive 85 per cent concurred that demonstrating impacts was key and 77 per cent thought charities should be more transparent about how they used money. On pay, 47 per cent were "comfortable" with chief executives being paid £100,000 a year (38 per cent were not) - but the proportion dropped to only 16 per cent (with 70 per cent dissenting) when the figure cited was £200,000.

Majorities thought there was too much competition, especially between large charities; that the sector was too cautious about campaigning; and that charities were slow to take advantage of digital technology. The perennial debate about charities being allowed to pay trustees off their own bat remains close, as in previous years of the survey: 38 per cent were in favour, but 44 were against. 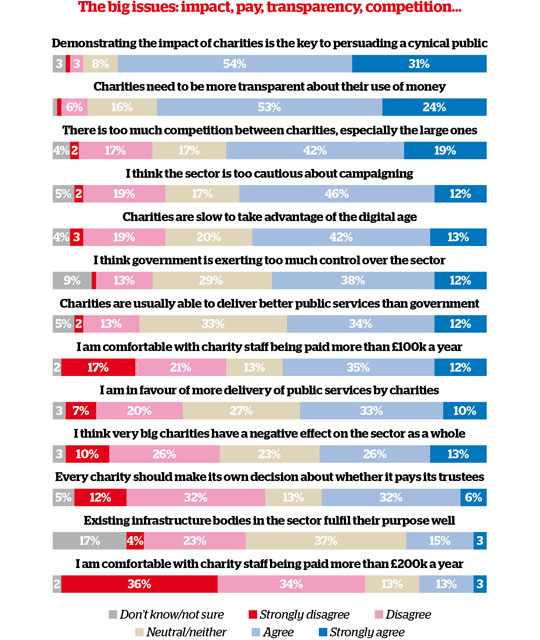 Saxton says: "I am struck by how government is now seen as an active threat – the lobbying bill and the general Tory right-wing challenges to the sector are prominent in a way they were not two years ago. So government is not only failing to deliver on policy, but is also actively trying to cage the sector more.

"To me, the responses about demonstrating impact, increasing transparency and too much government control all suggest that people are beginning to realise that it's up to charities themselves to make things happen: their future is in their own hands now."

"We are always one lost contract away from destruction," wrote one respondent in reply to the survey question about the biggest concerns in coming years. It was among 10 comments saying simply that survival was the top priority.

Such fears were more often expressed as concern over income and core funding, which attracted 72 comments. Second was concern about sustainability, with 51. "Growing our service provision to keep pace with demand while managing static funding," wrote one reader.

The third most frequently mentioned concern was attracting and retaining good-quality staff (19). This was followed by increased competition for funding and contracts. "The competition comes from organisations that don't have the same values," read one comment.

Twelve comments were about difficulties over volunteers, and 11 about recruiting more donors and supporters, especially younger ones. The same number mentioned the need to diversify income, take risks, innovate or be more ambitious.

Concerns about inadequate leadership came in 10 comments, and the same number mentioned survival and the knock-on effect on charities of cuts to local authorities.

A question about what you would do in fundraising if you could wave a magic wand brought a high number of requests for greater resources, simplified grant applications and boards that took more responsibility for fundraising.

One respondent wanted to "get rid of the 'no admin costs' myth", another to make all the "easy-to-fund" charities disappear, a third to abolish doorstep fundraising and a fourth to "get rid of the word 'innovative'". Another wanted a third of all fines imposed by courts to be given to charity.

Some requests were brutally simple: "remove the government from office"; "lower salaries for senior staff"; "replace the chairman"; and "a new chief executive". Others were more plaintive: "a less cynical general public" and "change the reluctance of people to give". 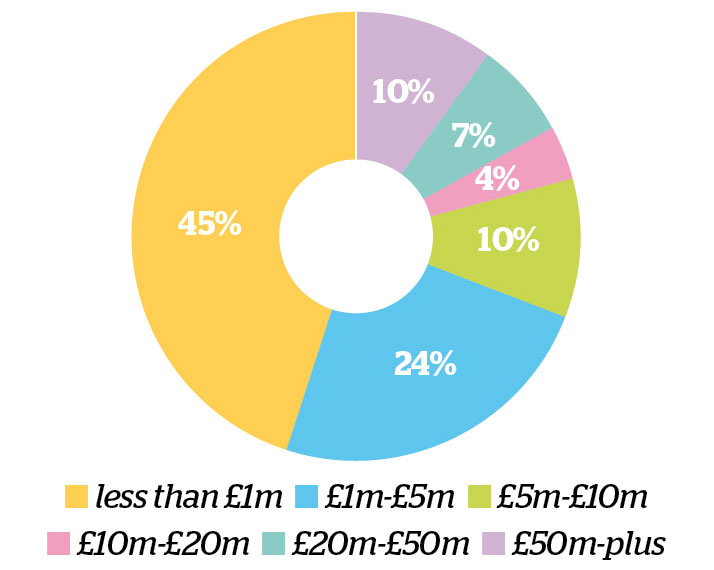