Thinking of starting a charity? Read this first 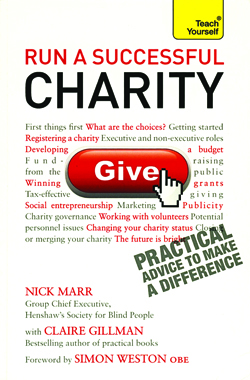 If you came across someone who was thinking about setting up a charity, this might not be a bad book to give them – not least because it tells you that "the days of being able to run a charity out of a biscuit tin are long gone".

It emphasises that wannabe founders might do better to put their resources into an existing charity, says that not everyone is cut out to run an organisation and warns that a lot of charities have their backs to the wall in the current economic climate.

It also points out that charity work doesn't always involve working with nice, like-minded people and that pitfalls abound, ranging from founder's syndrome to dysfunctional governance.

But this hard-headed approach is well balanced by a message about the fulfilment that can come from running a charity. This comes through strongly in the case studies and in the final chapter, entitled "The Future is Bright".

In a world of professional advisers, weighty tomes and technical language, the book's strength is that it consists of fewer than 200 pages, written in a popular style and artfully sprinkled with "Do it now", "Remember this" and "Next steps" boxes.

It could work equally as a primer for the beginner or a refresher for those who are already running an organisation.

Its author, Nick Marr, was schooled at Sandhurst, but the brisk style could be the trademark of his co-author and wife, Claire Gillman, a specialist in practical books. Marr has worked in charities for 30 years and is chief executive of Henshaws Society for Blind People.

The book leaves out a few controversies, such as the ethical and political questions around fundraising and campaigning. But it strikes a good balance between outline and detail and gives a realistic picture of charity work in just a couple of evenings' reading.