The homelessness charity Thames Reach wins the award for its London Reconnections project, set up to help the growing number of central and eastern European nationals sleeping rough in London or living in squalor. This need, the charity says, had gone unnoticed or ignored.

The project was expected to help 71 people a year when it was set up, but helped 842 people in two years. The work was controversial, because it involved organising a supported repatriation for the migrants, some of whom felt a sense of failure in returning home. Thames Reach had to be clear about what it was doing: offering a dignified return to those migrants who wanted to go back as an alternative to destitution or death on London's streets. 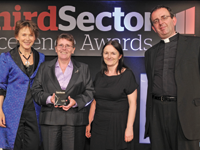 Third Sector's judges were impressed by the charity's direct and responsive approach. "It spotted a trend and identified a way of dealing with it that was low-cost and high-impact," said Elizabeth Balgobin.

"They were really getting in there and making a difference," said Linda Laurance. "They adapted their work as new information was acquired, and they were working in a very difficult area."

The judges were also impressed by the project's low cost: they noted that Thames Reach received £169,000 for 2010/11 from the Greater London Authority and calculated that the charity spent just over £400 on each person it helped. "The cost-effectiveness of this scheme was just stunning," said one judge, Mike Hudson.

The charity has also achieved a major success in changing the UK Border Agency's approach to central and eastern European migrants. Its awards entry said that in the past the UKBA would enforce the removal of migrants and place them on the first available travel option, which meant some ended up at airports or coach stations miles from home with no money and no one to meet them.

Now, the entry said, UKBA would not do this without first referring them to London Reconnections, which can direct them to support services in their home countries.