Awarded to a partnership between two or more charities that has enabled the partners to deliver services more effectively, communicate, reach new groups or reduce costs

When Fostering Network Northern Ireland looked at ways of improving educational outcomes for looked-after children, it found itself faced with considerable challenges.

Historically, educational attainment of children in care in Northern Ireland - currently numbering 2,356 - has been low. The charity, which supports foster carers and aims to improve the lives of children in care, recognised this was due to complex issues, such as the instability caused when a child changes schools.

The partnership with Booktrust, which promotes reading for pleasure, and Letterbox Club provided the perfect solution for seven to 11-year-olds in foster care. Individualised parcels of books, CDs, calculators and maths puzzles were sent to children by post, each with a personalised letter; their foster carers were also encouraged to get involved.

The Letterbox Club had already operated in England, so FNNI approached it to extend the service to Northern Ireland. This was funded by the region's Department of Education and the Department of Health, Social Services and Public Safety.

The partnership was a success. An evaluation by Queen's University Belfast in April 2011 found that the children involved had made significant progress in reading and maths.

"The Letterbox Club has been such a success because it has involved these children more in their education, encouraging them to become motivated and enjoy learning," she said. 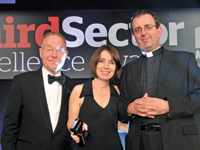 Richard Corden, a consultant at Central Lobby Consultants and one of the judges, described the winning entry as "a very simple idea, executed imaginatively and making best use of slender resources".