The long-standing campaign waged by Thames Reach, the London homelessness charity, against the sale of super-strength lagers and ciders has achieved remarkable success in government and the drinks industry.

Super-strength drinks have an alcohol content of up to 9 per cent and one can is the equivalent of fourand-a-half units of alcohol.

Thames Reach's research showed that super-strength lager was responsible for the deaths of more homeless men and women than heroin or crack cocaine, so it started the campaign in 2005 in a bid to reduce the toll the drinks were taking. 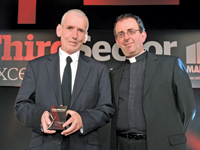 The campaign had two main aims. Evidence showed that price was a major factor in drinking patterns, so the charity called on the government to raise the duty on super-strength drinks. It also asked the drinks industry to take super-strength lagers and ciders off the market.

Former drinkers who had turned their lives around were enlisted to help with the campaign, which attracted coverage on BBC TV and radio, and in national newspapers.

The issue was also raised in parliament through an early day motion and was debated in the House of Commons.

The pressure paid off when the government announced in the Budget in March this year that it was putting an extra 25p on the duty of super-strength lagers.

The charity also took representatives from drinks manufacturers to visit its hostels, where many residents were struggling with problems relating to super-strength drinks. This had an instant effect: the drinks company Heineken immediately took its super-strength cider Strongbow Black off the market.

Judges were impressed with the tactics used. One of them, Peter Kyle, deputy chief executive of Acevo, said: "The campaign achieved amazing levels of public awareness and debate, behaviour change by beverage brands and policy change at the highest levels of government."