"Last year was one of the worst in memory for natural disasters," says a spokeswoman for the international medical aid charity Merlin.

The organisation's communications team - which consisted of only two staff for the first six months of the year, after which it grew to three - secured significant media coverage for its response to the disasters in Haiti and Pakistan.

The team also took its Hands up for Health Workers campaign to the United Nations General Assembly.

It published two reports and gained 12,000 signatures for a petition - exceeding its original target of 10,000 - by using Facebook and Twitter to contact potential supporters, as well as working with member groups such as the Royal College of Nursing. 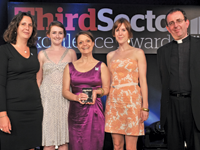 At the UN, Merlin co-hosted an event that opened with its campaign film and closed with delegates raising their hands for health workers.

The team also persuaded Pamela Stephenson, the psychologist and star of TV's Strictly Come Dancing, to support the charity. She accompanied Merlin representatives to the Democratic Republic of Congo, a trip that received widespread coverage in the media, including in Marie Claire magazine.

Merlin was also the beneficiary of a Christmas appeal in a national newspaper that brought in donations worth £220,000 (plus Gift Aid), 2,247 new supporters and more than £150,000-worth of media coverage. The charity also rebranded and launched a new website in 2010.

Awards judge Leslie Morphy, chief executive of the homelessness charity Crisis, said: "The Merlin communications team raised the profile of the organisation, increased the number of supporters and secured lots of coverage in a crowded market."

Another of the judges, Brian Lamb, consultant and chair of the campaign effectiveness advisory board at the National Council for Voluntary Organisations, said: "It was an excellent achievement by a small team."

He also said that the communications team had "outperformed against challenging targets and in difficult circumstances".