Reducing Suicide on the Railways, the partnership between Samaritans and Network Rail, represented something of a breakthrough. The emotional support charity had struggled to win corporate social responsibility partnerships - "due in part to the cause being taboo, or not as emotive as cancer or animal charities", according to a Samaritans spokeswoman.

But in 2010, the charity teamed up with Network Rail to launch a successful programme to reduce suicides on the railway by 20 per cent over three to five years. 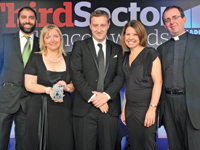 Suicides cost Network Rail about £10m a year in payments to train operators and damage the company's reputation. Over the 10 years to 2010, the national suicide rate had fallen, but the number of suicides on the railways had remained static. "The rail industry had been writing suicides off as a commercial cost and felt that nothing could be done," said the Samaritans spokeswoman.

Under the joint programme, Network Rail pays to train 5,000 front line staff in how to deal with suicidal and distressed people. The programme includes a national awareness campaign with messages on posters, beer mats and travel wallets.

During the first year, the number of railway suicides fell by 13 per cent, with a 21 per cent decrease in train delay minutes. This amounted to 30 saved lives, which equated to a saving of £1.9m, based on Network Rail's estimation of £63,000 as the average cost of a suicide to the company.

Ciaran Devane, chief executive of Macmillan Cancer Support and one of the judges of the award, said the Samaritans-Network Rail link-up was "a truly strategic partnership with equal benefits to each party"

and demonstrated "excellent joint working to save lives, driver distress and delays".

Another of the judges, Gail Scott-Spicer, the Scout Association's director of marketing and communications, said the business objectives of both partners had been met.