For two months last summer, 260 brightly coloured elephant sculptures appeared across London. And some of Britain's leading artists and fashion houses helped to paint and decorate them. 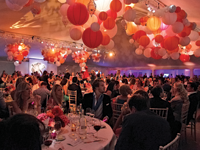 Organised by Elephant Family, the Elephant Parade exhibition was launched to celebrate the magnificence of the endangered Asian elephant. The fibreglass sculptures were installed in famous locations across the capital.

The charity invited 17 other conservation charities to participate in the campaign by adopting one of the sculptures. This also helped to raise funds for the campaign.

"By working together, the sector was able to show a united front and strengthen the message that ultimately we are all doing the same thing - saving habitat," the Elephant Family awards entry said.

The event cost £1m and took 18 months to plan, involving the charity's 12 staff and about 300 volunteers.

It broke the charity's media coverage and fundraising records, raising £4.1m - more than double its target. The elephants were sold in an auction, raising an average of £15,000 each. 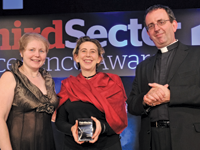 Elephant Family credits the way the auction was run for its success. It ran an online auction process, where bids could be registered during the exhibition.

In the final weeks, two live auctions were organised to maximise publicity for the sculptures. This helped create a bidding frenzy, with the lots closing several days after the live events, when interest was at its peak. The campaign reached an estimated audience of 25 million people across the capital.

The campaign was branded a "masterclass" by Emma-Jane Cross, one of the award's judges and chief executive of Beatbullying.

"An extraordinary campaign," she said. "It was meticulously planned and put together with ambition, great attention to detail and creativity."

Giles Pegram, another judge and a fundraising consultant, said the event was "brilliant" and "superlative", adding: "It's what fundraising should be about."