The Challenge Event team at Childreach International, which raises money for education and child healthcare in developing countries, has smashed a range of targets this year. It increased its number of partner universities from 17 to 44, has seen a 42 per cent increase in sign-ups for its events and is forecast to raise a record-breaking £4m.

The team, made up of four student fundraising managers (SFMs), promotes and runs the charity's flagship challenge events, including climbing Mount Kilimanjaro and trekking across China, for students across the UK. The four team members have an average age of 22. 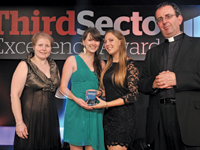 The SFMs implemented several new strategies in pursuit of these goals and the judges were impressed by their teamwork skills. First, they divided the year into four sections: training, recruitment, consolidation/support and execution.

They then divided the country into areas, with an SFM responsible for managing the relationships with universities and participants in that area.

"Full ownership of their area allowed members to tailor their expertise to a region, giving focused advice to our participants," said the charity's awards entry.

The SFMs ensured one of them was in the office to maintain a presence while the others were on the road. The team then held meetings twice a month to discuss how their projects were going and to support each other.

As well as working well together, the team has been commended for working effectively with other departments in the organisation.

Its entry for the award said: "The team has been successful at communicating with other departments and developing working relationships across the charity - in particular, with the operations and marketing team."

One of the judges, Ian MacQuillin, head of communications for the Public Fundraising Regulatory Association, said: "They worked well together in genuine teamwork, sharing success and failure, and they clearly had empathy for their target donors."