The Elephant Parade was deemed so innovative by judges that they insisted it should win this prize, even though it was not originally entered for it.

The campaign involved the charity Elephant Family organising an exhibition of 260 fibreglass elephants across London for two months last summer. The elephants were painted and decorated by artists from all over the world.

The idea behind the campaign was to think big. In its entry for another award, Fundraising Event, the charity said the event took "vision, bravery and a die-hard work ethic to pull off". 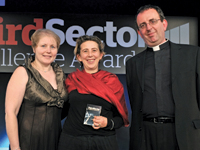 The entry said that because the charity knew it had only three decades to save the elephants, and that millions of pounds would be needed each year to change their future, it needed to generate several million pounds from a single event.

"This entry shows you don't have to be a large charity with a significant marketing budget to make an impact, that a great idea creatively executed can deliver PR, income and new supporters," it said.

To organise the event, the charity had to collaborate with hundreds of artists, sponsors, the London boroughs and several hundred volunteers.

It developed a number of partnerships to ensure the campaign ran smoothly, including one with the law firm Olswang, which gave pro bono legal advice, and another with the Halcyon Gallery, which found credible artists for the project.

The campaign raised £4.1m through the sale of the elephants in an auction. It also helped to raise awareness of the cause - for example, membership of the charity's Facebook group rose from 2,000 to more than 17,000.

One of the judges, Ian MacQuillin, head of communications at the Public Fundraising Regulatory Association, said: "This was a truly brilliant and inspirational campaign, exceeding all expectations and transforming awareness."