During the revolution in the affairs of the voluntary sector in the past decade, Kevin Curley has played the leading part in protecting and promoting the role of local organisations, especially in relation to government policy.

As chief executive of Navca, he has championed the country's thousands of community organisations and has earned the respect of sector colleagues and ministers in both the Labour and coalition governments.

His eight years leading Navca have been the natural culmination of a career dedicated to localism, except for one interlude leading a national charity, Headway, and two three-year spells as country director for VSO in Tanzania and Vietnam.

"He's a true professional," says Mike Clemson, who was Curley's first boss but spent the last part of his career working for him at Navca. "He's enthusiastic and totally committed to his work, always positive in his relationships with others.

"He's also a good leader, bringing out the best in others. His most notable quality is that he always embeds what he does in reality - the reality of what does and should go on locally."

Curley grew up in the Lincolnshire village of Harmston with his mother and elder brother - his father died of a heart attack when he was still a baby. He went to North Kesteven Grammar School and to York University to study English with education.

He joined the university's social services group, taking children on adventure days on the North York Moors. After graduating, he ran the York Playspace Group and became familiar with the workings of the city's council for voluntary service. From 1974 he spent six years as assistant director of Newcastle upon Tyne CVS, then eight years as head of Hull CVS, helping to set up organisations concerned with urban renewal, social welfare and race relations.

In all his work with CVSs, says Clemson, their interests have been his priority: "But he also saw the need for good relationships with local authorities and others - the need to be a bridge as well as a representative."

In 1986, Curley met his wife, Penny, a teacher, on the bus to London for a CND rally. Two years later they went to Tanzania, where he ran a large VSO development programme for four years; Curley has retained a special affection for the country, returning several times.

There then followed another stint in Hull as healthy city coordinator for the city council and five years heading Derby CVS before he became chief executive of Headway, which campaigns and provides support for people with head injuries and their families.

After the second VSO project, this time in Vietnam, the job at Navca came up. "For him, this was the dream job, and he had all the right credentials," says Clemson.

"Some of his predecessors hadn't stayed long. He had the breadth of experience and commitment, coupled with a desire to be in this kind of work and develop the role of the voluntary and community sector."

As the Labour government took more interest in the sector and set up what is now the Office for Civil Society, Clemson says, there was a lot of pressure on organisations to collaborate or even merge. "Kevin always argued that Navca was distinctive and different from the others, but he also had good relationships with them, including those that might be competitors," he says.

"Every time he puts forward an argument it's based on solid evidence gleaned from CVSs. When the government sets up any organisation to represent the sector, Kevin's on it.

"I advised him not to do too much now he's retiring, but he's already on two committees and I know he'll still be very much in demand."

The staff of Third Sector magazine

The Lifetime Achievement award is named after Luke FitzHerbert, who in 2005 became the first person to receive the accolade.

Luke, who died in a road accident in January 2007, began a remarkable career in the third sector in 1970 when, after spells working in industrial marketing and teaching, he founded the Brent River and Canal Society.

His voluntary environmental group campaigned successfully for the creation of parkland in west London. It prompted his 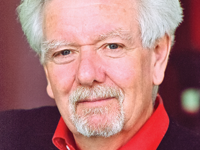 move into a full-time post in the voluntary sector, leading the first payroll giving project at the National Council for Voluntary Organisations.

From there, he moved to the Directory of Social Change, where he developed the organisation's guides to grant-making trusts and helped to provide training for thousands of voluntary sector employees on issues ranging from fundraising to public benefit.

During his time at the DSC, Luke also led a campaign to persuade trusts to become more transparent about their grant-giving.

He was an independent and sometimes controversial figure in the sector, a man whose work was always underpinned by his grass-roots voluntary sector ideals.