Awarded to a partnership between a voluntary organisation and a government department or agency or local authority. The relationship must be governed by a Compact

When a former healthcare manager, Nick Eastcott, retired after 30 years' service in the NHS in England and hospitals in the Middle East, he applied for a Vodafone World of Difference International Award in 2009 and travelled to northern Ghana in Africa. 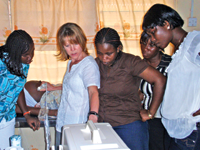 There, one in nine children dies before the age of five. Ghana's Upper East Region has one doctor for every 36,000 people - compared with one for every 250 in the UK.

A memorandum of understanding between the three organisations, which formally launched the public sector healthcare partnership, was signed in May 2010.

The project has helped to increase capacity in the seven hospitals in the country's Upper East Region, which serve a total population of one million people, through training programmes for Ghanaian staff and donations of equipment.

Healthcare professionals from Southampton University Hospitals NHS Trust travelled to Ghana to train more than 600 local professionals in maternal health, child health, safe surgery and emergency care. The partnership has also led to the donation of 54 beds, a mobile X-ray unit and other medical equipment. 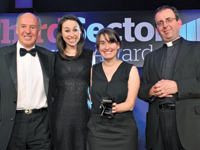 The GAS Partnership's entry for this award said it had broken new ground in the development of international links for health and "enhanced the livelihoods of those living in an extremely poor region of the world".

Gail Scott-Spicer, director of marketing and communications at the Scout Association and one of the judges, praised the "innovative partnership" which was "changing the very culture of communities towards healthcare".