Awarded to a small charity that has made a big impact with an innovative project or projects. Only charities with annual incomes of up to £1m are eligible for this award

The charity Education and Resources for Improving Childhood Continence wins this year's Small Charity, Big Achiever award for its Banish the Wee Horror campaign, an awareness month held in June 2010 that was designed to attract media coverage of bed-wetting and other childhood continence problems.

Eric also aimed to increase awareness of the support, resources and information it can offer to families facing the problem.

The charity, which works with about 100,000 families each year, has an annual turnover of £535,000 and spent only £550 on its Banish the Wee Horror campaign, most of which was used to fund the printing of leaflets and posters.

All eight of Eric's staff worked hard to raise awareness of the charity throughout the month, and it recruited famous faces such as the actors Julie Walters and Anthony Head and the agony aunt Deidre Sanders to support the campaign.

As a result, the charity received 37 separate pieces of coverage in magazines and newspapers and on websites; its own website received more than 2,500 hits. The coverage included articles in the national women's magazines Take a Break and That's Life and on the parenting websites Netmums and Super-nanny. The charity's awards entry said journalists started to approach the organisation for information after becoming aware of its work because of the campaign. 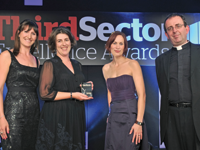 Judges were impressed by Eric's ability to secure such widespread media coverage with a low budget and a subject that was often taboo and never glamorous.

"It is really punching above its weight," said Elizabeth Balgobin. "It's a small organisation with a big reach that is doing something unsexy that no one wants to talk about. Despite the obstacles, it has succeeded in getting its voice heard."