When St Peter's Hospice wanted to expand its charity shop business around its home in Bristol, it decided to take a more entrepreneurial approach.

The charity conducted detailed research into the nature of its market, and was able to identify strengths and weaknesses in its current methods.

It began with a rebranding programme to improve the image of its businesses. Further research made it clear that a larger shop was needed to maximise profits, so the charity decided to replace two smaller stores in the nearby town of Clevedon. 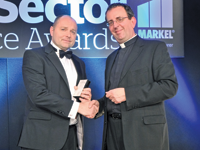 "We ensured that the staff and volunteers from both shops were involved with the decision to merge," the charity wrote in its entry for the award. "By consulting staff and volunteers, we successfully transferred our trading into the new store and closed two smaller shops in the area."

The charity carried out research into the styles of shop fitting that worked for major retailers and tested out designs and colour schemes for the shop in smaller units.

"Our experience has taught us that attractive shops attract good-quality stock, which in turn attracts customers and an increase in net profit," the charity wrote.

"The successes and failures of a variety of our shops were analysed and the positives taken forward to the new shop."

In the new shop's first year of trading, a profit margin of 60 per cent was achieved, compared with 38 per cent in the two smaller stores that it replaced. The charity spent £12,000 on the refurbishment - but it has already generated additional profits of about £30,000.

The judges said that the charity's strategy showed a sensible and intelligent response to a potentially more difficult market.

"This is a charity that aggressively attacked the tough economic conditions," said one of the judges, John Hemming, head of tax at the Wellcome Trust.

"It recognised its inefficiencies, researched, rebranded and took the opportunity to consolidate. Everything about it displayed innovation and clear thinking."