"I love them," said Elizabeth Balgobin. "They're dynamic and they are thinking ahead the whole time." Fellow judge Judith Rich said: "I find this very exciting. It is a young, enthusiastic board."

All 13 of the charity's trustees are aged between 18 and 26 and one, Josh Snape, became the youngest trustee in the sector when he joined at the age of 17. Yet the trustees have shown levels of maturity beyond their years in a number of ways. 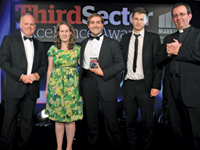 It did this by introducing a range of measures, including a bold fundraising campaign, moving office and holding 'virtual' board meetings. Most notably, the trustees helped the charity to bring in £500,000 in new income, some of which came from a contract to run activities for the UK Youth Parliament - a victory that secured five jobs at the charity.

Much of the judges' admiration for the BYC trustees was for their forward-planning skills. From 2009, the board began looking for ways to boost trustees' skills and confidence and to improve the charity's financial health in the face of the recession. The board used this work to shape its 2010-13 strategy.

Judges were impressed by the trustees' ability to raise the British Youth Council's profile at a national level. The charity secured an invitation to co-chair a youth summit with the deputy prime minister Nick Clegg and also gave evidence to parliament's education select committee.

"They turned things around from a position of financial vulnerability to a sustainable stance from which they could influence the national debate on youth issues," said judge Mike Hudson.