For the most innovative use of digital media

Beatbullying's Big March was set up to combine the campaigning impact of a march with the opportunities offered by new media.

The charity asked supporters to take part in a virtual march, in which avatars - digital representations of supporters - marched across the websites of 63 partners to show their opposition to bullying.

The march took place during AntiBullying Week 2010, which started on 15 November, and was complemented by the delivery of an offline petition to Nick Clegg, the Deputy Prime Minister, two days later.

The event was followed by changes in education policy, such as the introduction of anti-bullying training in teaching colleges and the nomination of bullying and behaviour as one of the four key areas to be examined by the schools inspection agency Ofsted.

The campaign also raised awareness of Beatbullying and its aims. Traffic to the charity's website increased by 3,264 per cent during the two-month campaign period from 15 September, and visits to the website of its CyberMentors project, where young people can receive advice from their peers on bullying, more than doubled. 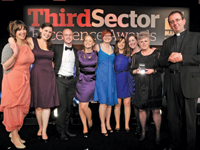 The charity also sold sponsorship packages to companies such as Google and Facebook. This enabled Beatbullying to allow smaller charities to participate in the march by giving them free access to the technology, meaning that they could also host the march on their sites.

Judges were impressed by the novelty of the idea. Jeremy Davis, commercial director at the digital agency Chameleon, said: "This project was notable for its innovative use of the digital media landscape - Beatbullying showed us what it was to think big and beyond boundaries."