Awarded to the volunteer who has, over time, shown the greatest commitment and achievement

In the aftermath of a recent shooting in Croydon, south London, tensions between gangs and the police looked like they were about to reach boiling point. Luckily, Barrington Wright, a volunteer for the SOS Project at the St Giles Trust, was on hand.

The project engages with young people caught up in gang crime - particularly street crime and weapons. Wright had built up a good reputation in the community through his work with the charity, so he was able to stop things getting any worse that day in Croydon. 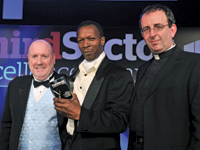 Wright first volunteered for the SOS Project two years ago after it helped his son, who was taken into custody after getting involved in gangs. Wright quickly impressed staff with his attitude and professionalism and has been volunteering for the charity ever since.

He currently volunteers more than 35 hours a week, working with more than 100 young people.

Wright's work with the charity includes providing emotional support and counselling, mediating with the local community when tensions arise and promoting the SOS Project in schools.

He also liaises with the local football team and managed to get one of the beneficiaries of the project, who was from a disadvantaged background, into professional football.

The charity has credited Wright for helping to reduce gang activity in the Croydon area last summer.

One of the judges, Emma-Jane Cross, chief executive of Beatbullying, said Wright was a passionate, committed volunteer. "Barrington is changing lives every day and every week," she said. "Every charity needs a Barrington - much respect."

Another judge, Olga Heaven, founder and director of Hibiscus, said: "He shows commitment and dedication - a good example of what volunteering really is."