For the annual report or review that best communicates the organisation's mission, operations and achievements

As a charity that gives homeless and displaced people the chance to get involved in performing arts, Cardboard Citizens likes to be creative - and its latest annual report is no exception.

The concept behind the report, which takes the form of an A6-sized booklet with 31 double-sided postcards, was that receiving a postcard is a "personal gesture in an increasingly digital world", according to the charity. It felt the postcard symbolised the journeys it takes its members on by helping them into education, employment and training. 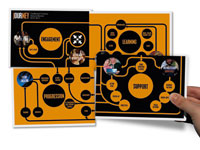 A centrepiece of the review is a diagram of the charity's methodology that illustrates how it creates a "virtuous cycle of engagement" with excluded people in all of its various programmes.

The charity wants the annual report to be used as a teaching aid to raise awareness of its work, so readers are encouraged to pull the postcards out and send them to friends. Its small size also enables the report to be carried around easily.

Each postcard carries information about the charity's different projects and how they relate to other aspects of its work. There are also statistics, financial information and images from shows Cardboard Citizens has produced.

In addition, the report provides evidence for new and existing funders of the charity's impact by presenting statistics and case studies highlighting the experiences of some of the people it works with.

It also includes a "curtain call" section that acknowledges the contribution of people who donate their talent, funding and time to the organisation.

His fellow judge Tilly Boulter, chief executive of Think Publishing, said: "I loved the approach, the design, the content, the stories and the strategy."