The charity St Dunstan's was a household name in the 1950s and 1960s, when it was known for its work with blind former military personnel. 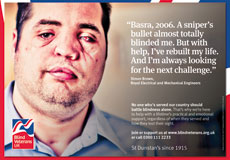 But research conducted by the charity revealed that few people under the age of 75 were aware of it today. A massive 84 per cent of beneficiaries questioned said that people they spoke to about the charity had "not heard of St Dunstan's or weren't sure what it did".

Clearly, it was time to rethink the brand. The two-year rebranding process began in 2010 and involved interviews, surveys, open forums and 11 focus groups. Staff and beneficiaries suggested more than 250 new names, which focus groups reduced to just four.

The brand consultancy Spencer du Bois then asked potential and current supporters, beneficiaries, volunteers and staff about the shortlisted names and overall brand identity of the charity.

The study concluded that Blind Veterans UK was the preferred name, that the new identity should capture the spirit of the armed forces and that basing the logo on the Union Flag would "get to the heart of the public and the organisation". 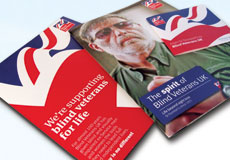 The budget for the rebrand was £90,000, but the charity estimated that it would help to raise an extra £7m over five years. The new branding incorporates a reference to the charity's former identity - St Dunstan's since 1915 - in honour of the organisation's heritage and to help maintain a link with the past for its older beneficiaries.

Award judge Francine Bates, chief executive of the Foundation for the Study of Infant Deaths, said it was a "very brave step to rename and rebrand an organisation that can trace its roots back to 1915, but the execution is very good and results look extremely promising".

Max du Bois, executive director, Spencer du Bois (he did not take part in judging entries his agency was involved in)