How do you ensure that your regular donors keep on giving, especially during an economic downturn? It's a problem that many charities encounter, including the World Society for the Protection of Animals. 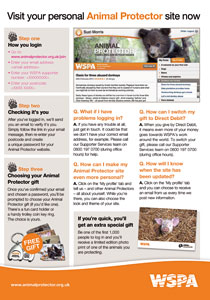 Research carried out by the charity revealed that it was losing just over 14 per cent of donors each year and its recruitment of donors had fallen. In response, the charity launched Animal Protector, an online committed giving product that it has promoted through direct marketing.

Under the scheme, existing regular donors were automatically renamed Animal Protectors and a dedicated website was created where they could read about the charity's work, view videos of the animals, create personal web pages and comment on posts.

Supporters were informed about their conversion into Animal Protectors through email blasts and direct mail packs, which also offered them a free gift for logging on to the website. The first 1,000 who logged on to the site received a limited-edition photo of one of the animals the charity was protecting.

In addition, Animal Protectors now get sent email notifications updating them about the projects they are supporting and asking them to consider increasing their regular contributions. Supporters who don't access the website continue to receive updates through the post.

The campaign has exceeded its targets. The average gift from Animal Protectors has risen by 74 per cent, from £5.29 a month to £9.22 a month. Thanks to the campaign, it has managed to reduce its donor attrition rate by almost 20 per cent. In addition, 5.5 per cent of donors volunteered to increase their donations without being asked to do so, which raised an extra £20,434.

Vicky Browning, chief executive of CharityComms and a judge of the category, says: "It's impressive to find a single, simple idea that will work so well globally."

- Save the Children: Capital Appeal

- Greenpeace: Save the Arctic Fundraising Appeal