Dashing up one of the tallest buildings in the City of London was the sell-out running challenge with a difference organised by the homelessness charity Shelter in March.

Vertical Rush is a tower running event in which participants tackle the 920 steps linking the 42 storeys of Tower 42, the second tallest skyscraper in the City. The event, now in its fourth year, attracted 1,200 runners this year, helping to raise more than £300,000 for the charity.

The event, on 1 March, was designed to be accessible to all ages and did not require runners to go through months of training. Entrants could take part before work or during their lunch breaks. They could also enter in teams so that they could participate with friends or colleagues. Celebrities including news presenter Jon Snow and chef Tom Aikens took part. 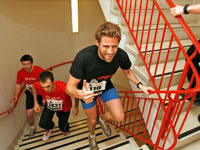 Inspiration for the event came from the Empire State Building Run Up in New York, where tower running is popular. Before Vertical Rush began, there had been no event on this scale in the UK.

The event secured coverage in publications ranging from The Times to Women's Fitness, helping to raise significant awareness of Shelter's work.

The event also attracted some unusual participants. One runner took it upon himself to run a vertical mile by running up the tower 10 times in an hour, and another ran in his full fireman's outfit.

As a result of the success of the event, Shelter says it has been able to reach hundreds of new supporters and the companies they work for.

Richard Gutch, one of the category judges and an associate at third sector recruitment agency Prospectus, said: "Vertical Rush may be in its fourth year, but it's a very innovative and participative idea."

The challenge is now part of the international Vertical World Circuit, a network of nine tower running events.