Mary Marsh's move into the voluntary sector happened in 2000 after one of her four sons spotted an advertisement for chief executive of the NSPCC in the Sunday papers and told her: "This is the job for you."

At the time, she was head of Holland Park School in west London, a pioneering comprehensive school that worked closely with other agencies, such as the youth service and police, and had a high media profile.

"It was a great match," she says. "There was a powerful resonance about children and keeping them from harm, and working on policy questions. It was an extraordinary, but also a natural next step."

Until this point Marsh had been close to the voluntary sector through student fundraising, her membership of the Society of Teachers Opposed to Physical Punishment, her support for the development of special needs provision and her backing of environmental causes.

But taking the NSPCC job brought her into the heart of the sector and opened a second phase in her career. In her eight years at the NSPCC, she oversaw the Full Stop campaign, expanded the charity's income from £50m to £150m, led the amalgamation with ChildLine and helped to boost the children's charity sector generally.

John Low, chief executive of the Charities Aid Foundation, says Marsh joined the NSPCC at a time when many charities were changing rapidly and required a refreshed style of leadership. "She brought a deep understanding of the needs of children and a successful track record of organisational leadership while in the public eye," he says.

Leadership had been one of Marsh's main interests after studying for an MBA at London Business School in the late 1980s. And when she left the NSPCC in 2008 it was for a job entirely about leadership.

In the wake of its successful development programme for leaders in the arts, the Clore Duffield Foundation had decided to set up a similar programme for the voluntary sector. Marsh applied to run it when she saw the advert because she was concerned that the sector was not generating enough of its own leaders.

The programme is now recruiting its fourth intake of at least 18 fellows, who will go through an intensive programme of training, mentoring and secondments. A total of 47 were recruited in the first three years.

"There is a deficit of leaders coming from within," she says. "The statistics are horrifying - the figures show that only 25 per cent of sector leaders have come up in the sector. I'm a case in point myself."

She says feedback from people who apply to the programme illustrates the besetting problem of sector leaders. "They say: 'I've never stopped and thought about me instead of the money, the project, the beneficiaries and what I've got to do tomorrow.'

"The demands are huge on our leaders and to motivate others you need flair and creativity. You can't do that if there's no space for you and you're stale."

The independent sector consultant David Carrington says: "In building the Clore initiative, Mary has provided a vivid role model of effective leadership - combining a determination to set and achieve high standards with a receptiveness to and curiosity about new ideas and possibilities."

Low says that Marsh realised early on that the operating context for civil society was changing and different leadership abilities would be needed: "Although they might not know it, many owe much to Mary. She is one of those exceptional people that you occasionally have the privilege to encounter."

The staff of Third Sector magazine

The Lifetime Achievement award is named after Luke FitzHerbert, who in 2005 became the first person to receive the accolade. 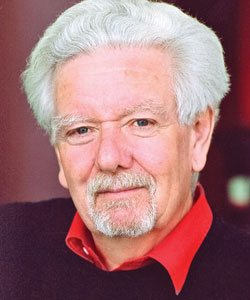 Luke, who died in a road accident in January 2007, began a remarkable career in the third sector in 1970 when, after spells working in industrial marketing and teaching, he founded the Brent River and Canal Society.

His voluntary environmental group campaigned successfully for the creation of parkland in west London. It prompted his move into a full-time post in the voluntary sector, leading the first payroll giving project at the National Council for Voluntary Organisations.

From there, he moved to the Directory of Social Change, where he developed the organisation's guides to grant-making trusts and helped to provide training for thousands of voluntary sector employees on issues ranging from fundraising to public benefit.

During his time at the DSC, Luke also led a campaign to persuade trusts to become more transparent about their grant-giving.

He was an independent and sometimes controversial figure in the sector, a man whose work was always underpinned by his grass-roots voluntary sector ideals.