Awarded to a partnership between a voluntary organisation and a government department, agency or local authority. The relationship must be governed by a Compact

Wales is a difficult place in which to provide specialist medical treatments. More than 46 per cent of the population has to travel for more than 20 minutes to reach services, according to the Welsh cancer charity Tenovus.

These geographical difficulties prompted the charity to launch the world's first mobile cancer support unit in 2009 to bring treatment closer to patients' homes and spare them long, stressful trips to hospital. The service provides chemotherapy and has delivered 3,000 treatments since it began. 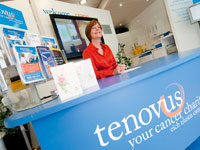 In January, it also set up what it believes to be the world's first mobile clinic for sufferers of lymphoedema - an incurable condition that can occur after cancer surgery that causes body tissues to swell. Previously, some parts of Wales had no services for the estimated 4,000 people with the illness and some reported being treated in hospital corridors because of a lack of proper facilities.

In an evaluation by Cardiff University between January and April this year, 57 patients awarded the service an average score of 4.9 out of 5. They noted that they appreciated its friendly environment and the short journey to get there. Staff gave the unit a score of 4.7 and rated it the same or better than the facilities they usually used.

The partnership is hoping to set up a second service and plans to extend the existing one from two and a half to five days a week. Its entry says the unit has provided "a blueprint for the major players in NHS Wales to work together with the third sector and national government".

Chris Harris, partner at accountancy firm MHA MacIntyre Hudson and one of the judges, said: "This initiative makes the best of existing resources to overcome long-standing obstacles."