Donor behaviour continues to evolve rapidly in response to the pandemic, and the latest edition of Enthuse’s quarterly research study reveals some interesting changes in recent giving patterns and attitudes. Here are three of the big themes to watch.

After a very challenging period for the third sector, the rapid progress of the vaccination programme and the government roadmap for moving out of lockdown offer some light at the end of the tunnel. All being well, the second half of the year should see mass participation events return, providing much-needed fundraising opportunities.

The latest Enthuse Donor Pulse report explores how the public has started to become accustomed to the ‘new normal’, with growing stability in their giving; how confident people are feeling about getting involved in mass participation and virtual events as the vaccination programme hits its milestones; and how the way in which donors are giving is changing for good.

One of the hardest aspects of the past year for charities has been the ongoing uncertainty they’ve faced – not just about whether they’re allowed to run particular activities, events and campaigns, but also in terms of how the public is reacting to the pandemic.

However, the last three months have shown signs of growing stability in the public’s charitable support, as they’ve become more accustomed to the new circumstances. For example, the number of people giving to charity has remained steady over the last three months, with 69% stating they have donated; exactly the same total as for the three months before that. This points to the public becoming more used to the new normal, and maintaining an optimistic outlook.

Another continuing trend is the rise in positive public sentiment towards the third sector. Over a third (35%) of people said they felt more positive towards charities and the work that they do, compared with just 4% saying they felt less positive. This underlines how all the hard work of charities to help during the pandemic is being both welcomed and recognised by the public.

Looking at future giving, 67% of the public are likely to give in the next three months. And it’s those who’ve given in the last three months who are far more likely to donate again in future. The difference between recent donors and non-donors is stark, with 86% of the former likely to give again, and just 24% of those who haven’t given planning to donate soon. Clearly, fundraising strategies and new campaigns need to keep current donors engaged and reach new supporters who are already active charity fundraisers or givers.

The restrictions on in-person events have been challenging for charities, even though virtual events have helped to bridge the income gap. The government’s roadmap out of lockdown provides the opportunity to restart in-person fundraising events, but participation will ultimately be down to how the public feels. While overall support for charities is stabilising, Enthuse’s research shows there are mixed feelings about events, with supporters split into ‘play safers’ and ‘fun seekers’, mainly driven by age group.

At the moment, only 27% of the public feel comfortable taking part in physical events. There is much less concern about virtual and hybrid events – but a key takeout here is that, even with restrictions being loosened in the months ahead, charities will need to reassure participants that they will be able to take part safely. One route to tackle this is to hold smaller in-person events as pilots, thereby starting to build supporter confidence in getting involved again.

The public’s appetite for physical events grows when people think about how far progressed the vaccination programme is. Encouragingly, confidence starts to return when more than half of the population is vaccinated – as is now the case – with 52% of the public saying they would now consider taking part in mass participation events. Gen Z and millennials lead the way, with 73% of both age groups happy to take part.

So, what kind of fundraising events are most likely to attract participation? The most popular choice with the public was something ‘fun’; with 41% ranking this their top type of event overall, compared to 30% favouring a ‘challenge’ and just 9% a ‘race’. The preference for ‘fun’ events is likely in response to the challenges of lockdown, with people now much more attracted to enjoyable activities rather than demanding or competitive ones.

So mass participation events will return in the second half of the year, and it’s good news that the fun-seeking younger age groups are enthusiastic to take part. The challenge for charities will be to get the format right in order to encourage as broad an audience as possible to get involved – particularly the (generally 40+) ‘play safers’. Consulting with supporters, piloting smaller events and using hybrid events are all going to be important elements in catering for all types of fundraisers.

3 Cash is out, online giving is in

While events may see some return to normality as lockdown restrictions loosen, the ways in which people donate seem to have permanently changed. A substantial 40% of the public have not made any form of cash donation to charity since before the pandemic started. This year of not using cash has had a fundamental impact on how people want to give, with only a quarter (26%) of the public wanting to use cash for donations in future, and the majority (51%) now choosing online giving as their preferred route.

The shift away from cash for future giving is reflected in how people have been donating over the last three months, with 40% of the public making donations online. The move online has also seen more people donating directly on charity websites, rather than through consumer giving platforms. Direct donations have risen from 40% of the total during the initial lockdown, to 48% during the last three months.

The increase in donations made directly via a charity’s website correlates with an increased number of donors able to recall the charity’s name after donating, with the 8% rise in direct donations nearly matched by the 7% rise in brand recall over the same period. Overall, 78% of donors giving directly to a charity can remember the name of the organisation, compared to only 63% using consumer giving platforms. The difference of 15% is significant, particularly for charities looking to convert one-off donors into regular givers.

So the pandemic and associated lockdowns have driven supporters to digital donating, and this has become habitual. Within digital donating, the public is moving to giving directly on charities’ own websites, and this in turn is leading to better brand recall. It’s important for charities to be well prepared to capitalise on this change as restrictions start to ease – as online giving is one habit from lockdown that’s unlikely to change. 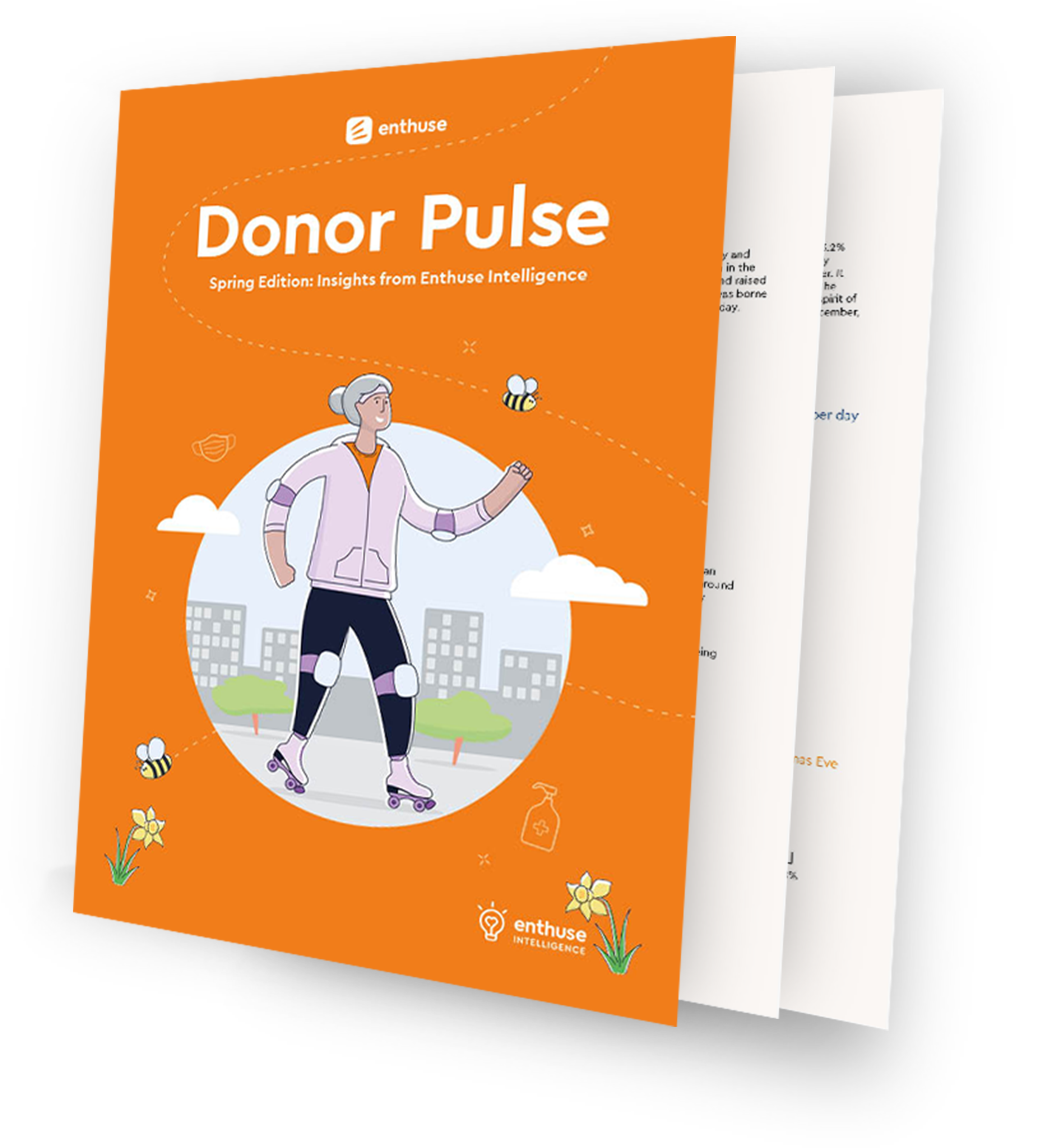 Enthuse is a fundraising, donations and events registration platform that has helped more than 4,000 charities, including one in five of the top 100, raise over £100 million.

Enthuse’s solutions are customised under a cause’s own brand and put the organisation in control of the data. This allows charities to build and nurture a loyal supporter base, raise more and have more impact.

Click here to download the full report, or for more information, email info@enthuse.com or go to enthuse.com.