Untapping the potential of Messenger Apps for charities

If instant messaging is such an obvious channel for charities to be communicating with their audiences, why are hardly any of them using it, asks Kirsty Marrins

It’s been two years since instant messaging took over texting here in the UK, with 160 billion instant messages sent in 2013 alone, yet charities have still to catch up with this channel as a means of communication with their volunteers, supporters and beneficiaries.

Paul de Gregorio, head of mobile at Open, believes that as people become savvier and more aware of the privacy concerns of social networks like Facebook and Twitter, instant messaging is a more attractive way to communicate with friends and loved ones.

He says," People can create their own private social networks by using groups in WhatsApp. I’ve seen this happen with my own family, friends and even colleagues – where groups have been set up for specific events, groups of people or work projects. And just like in social media, pictures, video and links are quickly shared and so chat ensues. So, if the people we want to inspire and communicate with are this obsessed with these messaging services, charities should be too."

If instant messaging is such an obvious channel for charities to be communicating with their audiences, why are hardly any of them using it? Paul believes that the main reason is a lack of API integration, as well as that WhatsApp is not designed well for business use. With Facebook recently announcing that it’s officially launched a chatbot API for Messenger, which is aimed at businesses, it’s surely just a matter of time before an API is launched for WhatsApp.

The potential for charities to use WhatsApp to communicate news, stories and campaigns is huge. Most recently MSF UK used WhatsApp to share a first-hand story of an attack on one of their hospitals in Kunduz in Northern Afghanistan, told by one of the doctors working there that night. 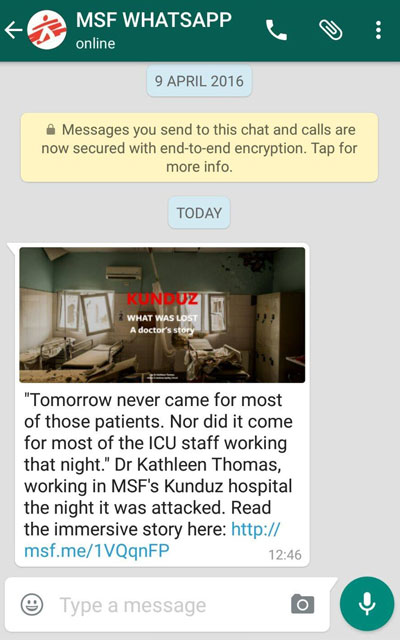 Back in December, London Ambulance launched a joint campaign with the Metropolitan Police and London Fire Brigade to help Londoners Eat, Drink and Stay Safe during the festive season. Londoners were encouraged to sign up to the campaign’s WhatsApp alerts where they would be sent helpful video hints and reminders to help them not over-indulge. The aim of the campaign was to reduce the number of alcohol-related incidents that these services respond to during the Christmas period.

Ross McCulloch, Director of Third Sector Lab, believes that it won’t be too long before traditional face to face services offered by charities will be able to reach more people through bots, "Bots within messenger apps like Whatsapp and Facebook Messenger could revolutionise how charities interact with the public. Artificial Intelligence is already sophisticated enough to provide tailored advice and recommendations to users. I think we are on the cusp of being able to offer what is traditionally face to face advice, support and health services to a wider audience than ever before through the power of self-learning bots."

Bots already exist on Facebook – for example, you can book an Uber through it in the U.S. What’s changed is that Facebook has now opened up their technology to developers to be able to create their own bots, and the bots will live within Facebook Messenger.

McCulloch says, "People are downloading less Apps and they’ve hit saturation point. Messenger Apps, however, are a space where people are spending more and more time so it’s vital that we can reach them in this space."