Is virtual reality the way forward to engage Generation Z?

Charities need to experiment with different forms of techonology to reach out to the younger generation, writes Kirsty Marrins

Generation Z (those born in the 1990s and early 2000s) are the first generation to be born into digital. They are true digital natives and they are estimated to make up around 27 per cent of the global population. So how can charities reach out to this generation of future donors and supporters?

The author and trainer Beth Kanter says: "While there are larger numbers of Gen Z in India, China, and Nigeria compared to UK or US, they are truly a global organisation. Gen Z donors are likely to have a much larger network of connections or friends online, because they don’t connect with their peers at school, their networks are global."

Kanter recommends that in order to reach out to Gen Z, you need to treat them as adults, talk in images, communicate in ‘snackable content’ and tell your story across multiple screens.

My New Home by Plan International Sweden is a 360-degree film, made with virtual reality technology, about refugee children in Tanzania. It is an interactive story, in which you explore Nyarugusu Refugee Camp as if you were one of the children living there. The voice of a refugee child guides you around his new home and tells you the story of his day-to-day life in the camp. As you explore the camp, you get to meet some of the children whose everyday life has been shattered by violence and the loss of family members. While life is hard, there is also lots of laughter and smiles while they play in the child-friendly places provided by the charity.

Sanna Wolff, project lead at Plan International Sweden, says: "Rather than producing a film or footage we call it a '360 and virtual reality experience', since it combines both film and footage in a way resembling a computer game. It started off from the will to create something different than what we NGOs often do - communicating in a traditional way through stories, pictures and films and often being so serious in our approach that young people, who don’t necessarily have a special interest in our area of work, find it too hard to digest and engage with.

The project has been financed by a Sida grant for information and communication. Wolff says the project has enabled the charity to reach out to students aged from 10 to 18 years old "in a way that they understand and relate to". 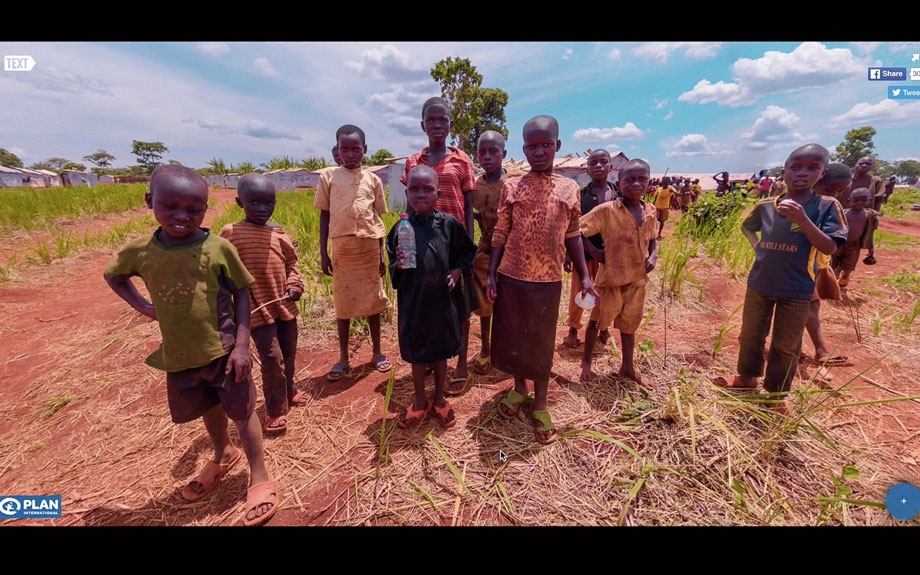 My New Home was first launched in February 2016 through social media and a collaboration with one of Sweden’s biggest news platforms, Expressen, and has generated 40,000 views. The Swedish National television company, SVT, accompanied the charity to a school showcase where they broadcasted it for a news show for children. Since the broad media launch, the charity has been working mainly through reaching out to teachers and encouraging them to work with the material in their classrooms. It has produced a guide for teachers with exercises to hand to their students as they explore the camp through tablets, computer or virtual reality equipment. The charity will also be at several youth festivals this summer and autumn to let the festival goers experience life in the shoes of the children living in the Nyarugusu Refugee Camp.

Sanna says: "This is a new way for us to explain our work and a unique way to create closeness and get people to identify with these children. We believe this is an emerging market for communicating our issues and we will be working on more virtual reality projects in the future."

Plan International Sweden is a great example of how charities can use 360-degree video and virtual reality. However, while the potential of virtual reality is exciting and feedback in this example has been positive, there are of course many barriers to mass adoption by charities - cost being the biggest one. There are, of course, ways to use virtual reality on a limited budget, however the time and skills needed to create and edit needs to be factored in. I don’t believe virtual reality will become mainstream any time soon but we are seeing more and more charities experimenting with it and that is always a good thing. Charities need to experiment, test, learn and iterate in order to make the most of new technologies to engage with their audience.