The international charity has raised £1.2m for the Big Dig appeal

The Big Dig appeal has been set up to help people in two communities in Malawi - Bokola and Kaniche – gain access to clean and safe sanitation for the first time. The charity hoped to raise £1.2m and the government has pledged to double all donations made by 18 September 2012. In the six weeks since the campaign launched, it has already reached its target and is continuing to collect donations for the remaining six weeks of the appeal.

It has launched a dedicated website, designed and developed by The Good Agency, called the Big Dig blog, where the public can donate money to the appeal. The site was launched by the well-known blogger, fundraiser and activist AJ Leon, and will be updated every week of the campaign.

Through videos, photos and blog updates, the public are able to meet the people in Malawi whose lives are being changed thanks to their support. They can follow their progress over the summer as they go from living without clean water to receiving it for the very first time. It will culminate in the live drilling of a borehole in September.

The charity has brought a number of celebrities on board to help promote the appeal. Rachel Stevens, Joanna Lumley and Lorraine Kelly are among the famous faces lending their names to it.

How was the campaign launched? 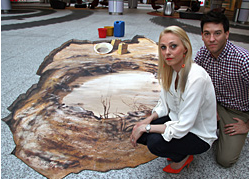 The campaign was launched at Westfield, London with a 3D pavement art recreationof a dirty waterhole (right, with the Strictly Come Dancing star Camilla Dallerup and the actor Kevin Sacre). People were invited to have their photographs taken with the artwork by the street art agency Street Advertising Services, and these were then shared on Facebook. They also had the opportunity to feel the weight of the water typically carried by millions of women and children in the world’s poorest countries.

More than 30 radio stations, including First Radio and Real Radio, also supported the campaign. DJs encouraged their listeners to donate by sponsoring them to take on fun and varied challenges, including recording a special version of the song Fever and presenting an all-day show without drinking anything.

The Big Dig appeal is a great example of a multi-platform campaign that is using every channel to encourage donations. From video content, Instagram apps on mobile phones, Facebook, Twitter and live blogs, to events and celebrity support, this is a well-thought-through campaign and it's not surprising it reached its target early.

The live blogs also allow members of the public to get to know the beneficiaries and actually see how their donations are being spent, which will go down well with donors.