How WaterAid's 'To Be A Girl' campaign exceeded expectations

WaterAid admits its To Be A Girl campaign was an ambitious one but was committed to highlighting the difficulties faced by thousands of women and girls around the world because of poor sanitary conditions.

The campaign, which aimed to raise £1m, was set up to help women throughout the world "whose basic human rights were compromised" during their monthly menstrual cycle because of a lack of safe water and toilet facilities. To achieve its aims, the charity hoped to engage what it regarded as the hard-to-reach audience of women aged between 18 and 24. 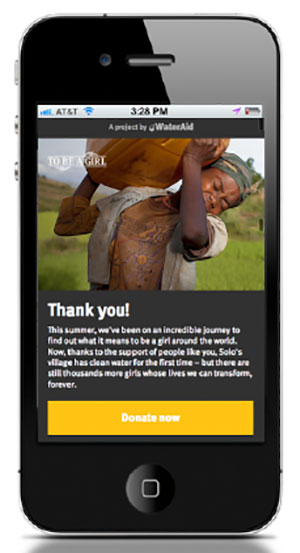 As results showed, the campaign far exceeded WaterAid’s expectations, with more than £2m raised – the most ever from a standalone campaign run by the charity – which was matched by UK government funds as well as a hugely successful digital campaign that was lauded within the sector.

The main issue facing WaterAid was engaging its target audience, the 18-24 age group, which it perceived as being time-poor and heavy users of mobile phones. A microsite was created that suited the mobile platform and which asked a simple question as the first step for users towards building a relationship with the charity. WaterAid used the site to generate two-way conversations that focused on current news, taboo subjects and gender rights issues.

The central call to action was a question-and-answer device, designed to capture email data. People’s responses then determined the subsequent user journeys for a personalised campaign experience. At the same time, women were invited to share their own childhood images with the hashtag #measagirl within their own network, generating further organic growth on digital platforms.

The initial email trigger programme took the audience through a series of low-commitment asks that were primarily social-media based. WaterAid anticipated these initial conversions would help to build momentum in terms of trust and compliance, which would ultimately make people more likely to react positively to the financial asks.

What did it achieve?

The main goal was to reach £1m within three months of the launch, but it secured double that figure and was subsequently boosted by the government's match funding. 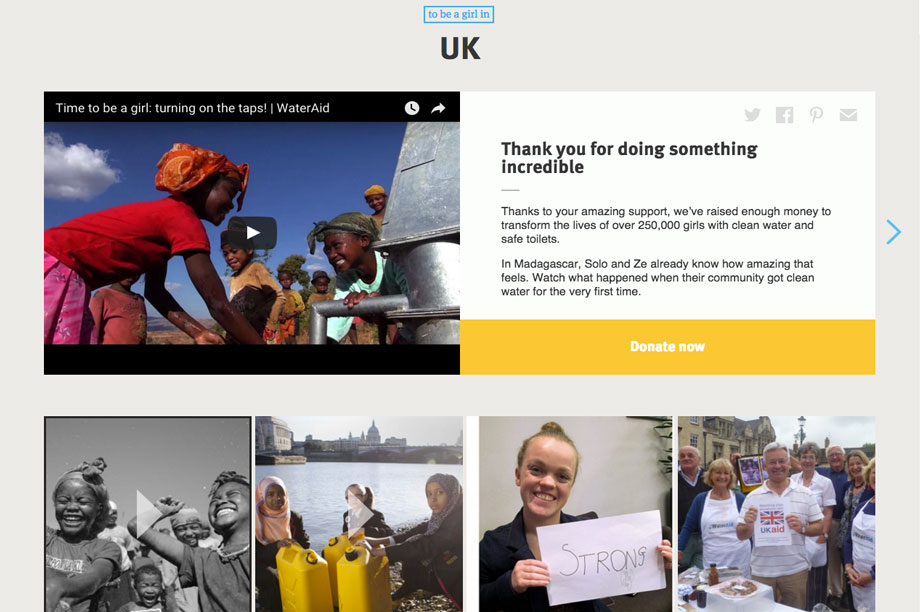 However, the charity had also tapped into a new audience; of those who donated online, 82 per cent were new supporters and the To Be A Girl website was visited 85,533 times, more than three times WaterAid’s initial target. Half of all the new supporters donated online, compared with 14 per cent of existing supporters, reflecting the effectiveness of the digital campaign.

To Be A Girl was an integral part of WaterAid’s focus on digital engagement, which it had developed since 2012’s award-winning The Big Dig, a campaign described by the charity’s marketing digital lead, Temina Milovanovic, as WaterAid’s "eureka moment".

"Each cross-organisational campaign has built on the last, broadening the number of teams involved and streamlining processes, ensuring tight integration with media and, above all, on listening to our audience through insight and research pieces," she told Third Sector.

"As a result of these large campaigns, teams across the organisation are ever more connected and aware of each other’s roles and skills, which has positively impacted ongoing ‘business as usual'.

"We are increasingly using the same vocabulary and highlighting opportunities as they arise."

The current Deliver Life campaign is an example in which WaterAid has taken the To Be A Girl learnings forward. In the latter campaign, the charity had tested a two-stage acquisition, result of which showed huge engagement when there were no financial asks. These led to new leads through the email sign up device.

"The improvement for Deliver Life that we built on was to focus all the early campaign on telling the story and also using relatable social action with Calls to action focused on engagement to build and deepen relationships with our audiences."