Why one charity broke away from the Cyrenians

Cyrenians, which mainly helps the single homeless, has become a familiar charity in UK cities during the past half-century. The loose Federation of Simon and Cyrenians shares resources and best practice, but prohibits members from competing for contracts in each other's areas. Susannah Birkwood relates how the Cyrenians in Tyneside, now called Changing Lives, stayed out of this agreement and went for growth instead

Named after Simon of Cyrene, who helped Jesus carry his cross, Cyrenians currently works in 10 UK cities. Its founder was Anton Wallich-Clifford, a Catholic probation officer who in 1963 started the Simon Community, a movement set up to provide an alternative for homeless single people who, at the time, faced the stark choice between night shelters and huge, 1,000-bed lodging houses.

Wallich-Clifford established a small 10-person hostel in London where residents and staff lived and worked together. He encouraged others to set up their own groups based on that model, and in the late 1960s communities were founded in Cambridge, Exeter and Oxford. The Cambridge group was initially called the Companions of Simon; the other two chose the name Cyrenians. The charities were not overtly religious, but trustees were often recruited through churches.

In 1970, Wallich-Clifford met a homeless man in London called Tom Gifford who began working with him. Gifford and his wife Brigid established the National Cyrenians, aiming to build on the Simon Community's original vision and to create a nationwide support network for organisations that facilitated community living for single homeless people.

Gradually, more Cyrenians groups were registered as charities in places such as Gateshead, Bradford, Edinburgh and Aberdeen. Initially, they received help from the national Cyrenians with fundraising, staff recruitment and campaigning, but as they grew in size in the 1980s they received less help from the national charity, which was also struggling financially because of reduced grant funding; it relocated from Kent to London in 1986 and attempted to relaunch as Homes for Homeless People, but eventually closed down.

Since then, many of the local charities have also disappeared, including Oxford Cyrenians, which did not recover from the negative publicity prompted by the stabbing to death of one of its volunteers by a schizophrenic beneficiary in 1993. It was not until 2012 that the Simon Community and London Cyrenians led the creation of a new national alliance: the Federation of Simon & Cyrenians, which allowed members to share resources and best practice with one another. A condition of membership was that charities agreed not to bid against other members for service delivery contracts.

Brian Holman, manager of Cambridge Cyrenians, was closely involved in setting up the federation. He says that several Cyrenians charities decided not to participate, including the one from Tyneside, which preferred not to take part if it could not compete wherever it liked. "We felt that was going against the spirit of the federation," says Holman. "The whole idea of it was to support and help each other. Tyneside were looking at lots of other contracts, particularly those of Bradford Cyrenians." The chief executive of Bradford Cyrenians declined to comment for this article.

Controversy in the community

This was not the first time the Cyrenians on Tyneside had caused controversy in the community: in late 2009, it dropped the word "Tyneside" from its name because it wanted to expand into the rest of the north east. Holman says this caused confusion – for example, when a local man raised a significant sum of money for Cambridge Cyrenians but assumed The Cyrenians was the national charity and used that name on JustGiving. As a result, the money was received by the Tyneside organisation instead. After consultation, each organisation got half the donation.

Holman was also concerned that people would get the impression that campaigning or advertising by The Cyrenians was carried out on behalf of all Cyrenians rather than just the Tyneside organisation. "What if everyone thought that we had endorsed it?" he asks. 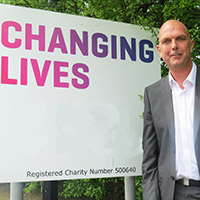 Using the name Changing Lives has helped it to go from strength to strength under the leadership of Stephen Bell (pictured, right), who became chief executive in 2002, when the charity had an income of £450,000. Its most recent annual income was £15.2m. This is partly the result of the geographical expansion of its services beyond its native Newcastle and Gateshead into the wider north east. Soon its reach was extending further still, to the north west, the Midlands and south Wales, and it no longer regards itself as part of the Cyrenians movement.

Bell's tenure began under difficult circumstances, when his predecessor died unexpectedly. "I was going to be deputy chief executive," he says. "However, the lady who was coming in as chief executive started work, but then developed leukaemia and died. While she was having treatment, I acted up; after she died I was made chief executive by default."

At the time Bell was one of two people in the charity's back office, where there was no computer. "It was quite religious," he recalls. "I remember our first board meeting - I was asked which church I went to. I said I didn't go to church. I was thinking 'bloody hell!' as they walked off." There are now no references to religion on the charity's website.

Bell started at the charity as a finance officer in 1995, aged 27. The son of a bus driver, he had previously worked at Go Ahead Northern, the predecessor to the bus and train operator the Go Ahead Group, where he began his career at 16 as a personnel clerk. He believes his private sector background influenced him to run Changing Lives with greater financial rigour than some of his counterparts. "I suppose we're probably more commercial than other charities," he says. "We know the bottom line of every scheme we operate."

The private sector mentality Bell speaks of is apparent in the raft of property purchases and renovations the charity has carried out across the north east over the past year. In February it announced that it had 50 properties in its portfolio; it rents these out for about 80 per cent of the local market rate (usually about £500 a month), mainly to beneficiaries who have experienced homelessness and other issues.

In 2013, Changing Lives also agreed to take on various regional centres and employees from the women's charity Platform 51, now known as the Young Women's Trust. Platform 51, which had been losing millions of pounds, transferred its centres in Doncaster, Knowsley, Wales, Wolverhampton, Middlesbrough and Nottingham to Changing Lives, along with 64 employees who had been working on front-line projects.

So how did it work out? Bell says the services it took on in Wales – a women's criminal justice scheme – have now closed, mainly because of a lack of funding, and it was difficult to secure funding in Wolverhampton. Overall, however, he views the arrangement as a big success and says it allowed Changing Lives to gain a national profile and, for the first time, boost its services for women and children substantially. He says: "I've always believed that if we can reach our clients at a younger age, it will stop them coming to us when they are older; but that means working with the child's parents – normally it's got to be both of them – to stop them coming."

Changing Lives now employs 380 people – compared with 42 when Bell first joined – and has a crowded back office, where the middle managers and directors sit. "There are more staff in the back office now than there were in the whole company when I started," says Bell. "We now get criticised sometimes for having all these staff in there."

For the past six or seven years, the charity has hired former beneficiaries as employees, and its latest business plan even stipulates that ex-service users must represent a quarter of all staff – a quota that Bell says the charity is already meeting. The charity brought in the policy after approaching several employers to hire some of its beneficiaries as part of a programme run by the charity Business in the Community. "We found we couldn't ask them to employ someone if we weren't doing it ourselves," he says. "It was bloody hard work at first."

Bell says there was also a degree of resentment among the existing staff when the first ex-service users were employed, and some people criticised him for employing the former service users in menial jobs. "They felt we were treating people differently and not all the staff were trained," he says.

But he says the charity – which in 2014 came 13th in the Sunday Times list of the best 100 not-for-profit organisations to work for – has perfected the policy over the past five or six years. It now ensures that ex-service users are appointed at all levels – including the board of trustees – and that everyone is given the same level of training and supervision. "If you worked with an ex-service user, you wouldn't know that person's history unless they shared it with you," he says.

Bell says the ex-service users make a significant contribution to the charity: their experience gives them a valuable perspective on the likely effectiveness of its services, as well as a sense of when people are taking advantage of the charity. "A lot of people that come through the services believe in tough love, and they sometimes think we're a bit soft," he says. "I've seen a couple have a few words with service users and thought maybe they were being too tough – but actually they're right."

The charity's plans for the next five years include increasing its turnover by £10m and looking for opportunities to expand into London. It also wants to develop more of a campaigning voice, but Bell is keen to ensure this is done in a positive way.

"I won't ever whinge about cuts," he says. "You've got to get used to the fact that they will happen. As a sector, we can't just tell politicians how bad it is all the time. Some of the issues that are coming through at the moment – such as the £12bn of welfare cuts and the benefits sanctions – make it very difficult for us to stay positive. But we are doing some phenomenal work with the most disadvantaged people in society, so we've got to present the positives."