Why prize-led fundraising is a win-win for charities 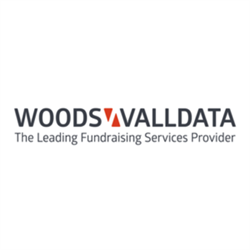 Helen Daw, head of data strategy and insights at Woods Valldata, shares how prize-led fundraising, such as raffles and lotteries, can not only increase your cash and regular giving, but engage new audiences too.

You may be forgiven for thinking that prize-led fundraising is new when in fact, it’s centuries old. The first recorded lottery originated in the Chinese Han Dynasty in 205BC. In the 15th century, the first known lotteries for monetary prizes were recorded in the Low Countries, and in 1994 the National Lottery launched in the UK. Charity lotteries are a well-regarded and well-established form of charity fundraising.

According to the Gambling Commission, there are 600 licensed raffles and lotteries in the UK, leading to £831m in sales and £367m of that going to good causes. This is a 10.7 per cent increase on the previous year.

According to a YouGov survey of the 25 most popular charities in the UK (August 2020), the majority have lotteries and raffles among their sources of fundraising income revenue. Lotteries is a really buoyant, growing and developing area and one charities should tap into.

The Charity Benchmarks – Impact of Covid-19 Monitor report shows that prize-led fundraising is hugely important. In some ways, it is more important than ever, particularly over the past year with Covid-19. In 2020 there were increases in cash income (which includes raffles) as well as regular giving income (which includes lotteries) as an overall percentage of the fundraising portfolio.

Data from Woods Valldata shows that the number of weekly lottery cancellations in 2020 was much lower than in 2019 – positive news for regular giving income via lotteries. There was an increase in raffle response rates, too, from 2019 to 2020, showing that people were still playing and participating, despite the pandemic.

A typical warm response rate for a raffle direct mailing is about 18 per cent and a warm average gift is about £20. The data shows they both increased in 2020, particularly among loyal raffle players. 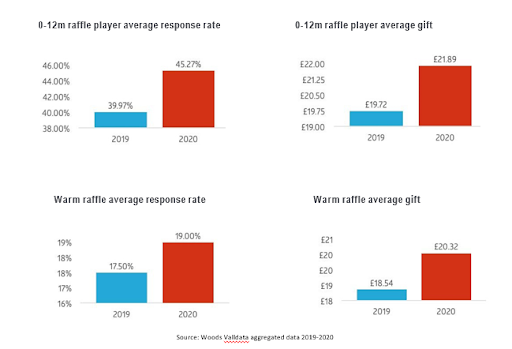 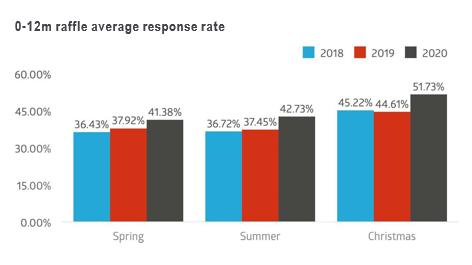 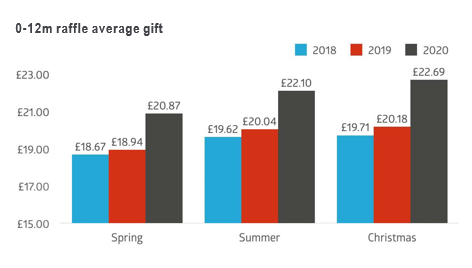 Reflective of the focus on digital during the pandemic, there has also been a marked shift toward digital in raffle response. The data shows that the average online gift increased by four per cent from 2019 to 2020.

Despite a difficult year, and the worry that regular giving would be badly affected, lotteries have remained buoyant. Income has remained pretty much the same, despite the cutting-out of acquisition channels such as in-store and door-to-door.

Raffles are a form of a one-off gift; think of them as a prize-led alternative to a cash appeal. Lotteries are a form of regular giving and are a prize-led, committed gift. They offer different ways to engage with supporters and potentially move them up the supporter journey ladder.

Why do people do fundraising in a prize-led way rather than a traditional, cause-led way? According to a survey by the Gambling Commission, some of the motivations that people give for playing a lottery are:

The majority of people play a lottery to win a prize. However, about 57 per cent of those said they liked that it was supporting a charity.

Data from Woods Valldata shows a lottery cost per acquisition average is about £65-£110 per recruit, lottery annual gifts are between £65 and £85, and one-year attrition rates are between 10 per cent and 30 per cent. For raffles, the CPA average is about £15-£35 per recruit, the cold direct marketing response is two per cent, the average cold direct marketing gift is £12 and the average gift via digital is £8-£10.

Who participates in prize-led fundraising?

Woods Valldata charity raffle and weekly lottery player personas show that raffle players tend to be older (aged 66+) and slightly more educated than the Cash persona, but they are quite similar, so they will happily both play raffles and give cash gifts. This offers another opportunity to engage your support base with different asks.

Regular giving tends to have a slightly younger and more affluent demographic and weekly lottery is, therefore, another way to ask for a regular gift, but to a different audience. The weekly lottery audience is slightly older, less affluent but has the prize motivation. The new audiences identified in these fundraising product areas provide an exciting opportunity to use the shift to new channels already taking place and widen out the new audiences to charities even further.

Using these general characteristics, you can start to see where raffles and lotteries can help offer additional opportunities to ask in a different way to your current supporters. 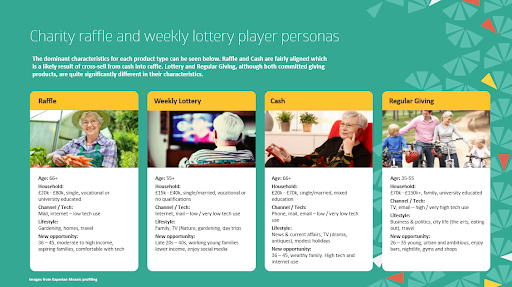 In 2011, when GOSHC first introduced a raffle into its portfolio, it was a way of introducing a new product and audience. The raffle programme, now three a year, has gone from strength to strength. It aims to raise £12m over the next 10 years through this activity.

Not only is it a great fundraising tool, it’s a great engagement tool, particularly as an alternative way to give, with existing, warm cash audiences. It is a stepping stone to legacy giving.

As an example, from 2015-2019, the charity generated £83m from legacy bequests and 23 per cent of that was attributable to supporters who had engaged with the organisation through its cash programme and its raffle programme. And that percentage is going up year on year.

Advice from Tanya Mitchell, individual giving deputy director at GOSHC, is to not see raffles as a vertical income stream but rather view it holistically, as part of your supporter experience, tracking success and contribution over time.

GOSHC set up its lottery in 2020 and one of its fundraising strategic imperatives is to look at sustainable income. Over the next 10 years it is looking for a net profit of £47m from lotteries and average about 54,000 new players each year, which will bring in new audiences who are different to its raffle audiences.

In terms of the audience mix, Abena Bentum, individual giving senior manager at GOSHC, explains that the majority of raffle players are older, whereas the lottery audience has more younger, asset-rich families, followed by an older demographic that mirrors the raffle audience. The lottery is still very new, so, as the charity introduces more acquisition channels, it will expect to see that audience mix change.

The growth in the charity lottery space is huge and growing quickly. More people are now considering it, in addition to or over the National Lottery. Charities looking to not only diversify their income but create sustainable fundraising products should consider adding raffles and lotteries to their fundraising portfolio.