Wooden Spoon stirs up excitement with the Arctic Challenge

The children's rugby charity, which is supported by BT MyDonate, is awaiting verification that it has set a world record for organising a rugby match at the North Pole

Wooden Spoon, the children’s rugby charity, proudly supported by BT MyDonate, has organised the northernmost rugby match in history at the North Pole and is waiting for verification that it has set a world record.

Tim Stimpson's team emerged victorious by 17 to 14. To ensure the world record was legitimate, the North Pole rugby pitch had to be measured and marked to make sure it complied with world rugby regulations. Lee Mears, the former England hooker, also had to train to be a referee to ensure the match would meet requirements. 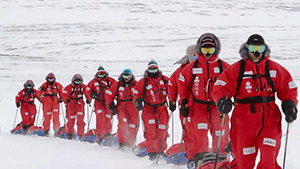 The team flew out in May after being trained to deal with temperatures of -50 and the danger of polar bears. It was a gruelling and risky challenge; the expedition leader became too ill with an infection to continue and the players had to spend an extra two nights at the North Pole because the weather was too bad for their plane to return to Resolute Bay in Nunavut, Canada.

On their return to the UK, the teams were shocked to discover that two Norwegian scientists had died at the North Pole during the same period as their Arctic Challenge took place – a stark reminder of how dangerous it was, says Juliette Gillard, head of marketing at Wooden Spoon.

Wooden Spoon was set up after the 1983 Five Nations game, when England lost and the England fans were awarded a wooden spoon by their Irish friends. The England fans accepted the spoon and decided to hold a golf match to see whether the spoon would be passed to Ireland or kept by England; this golf match became the first fundraising event, and the Wooden Spoon charity was born.

"The charity is about supporting children through the core values of passion, integrity, teamwork and fun, and harnessing the support of the international rugby community," says Gillard. "People fundraise across the UK and Ireland, and we have ambassador support from international rugby players who raise awareness about what we do."

Like many charities, Wooden Spoon’s fundraising is delivered by regional committees across the country. But Wooden Spoon ensures that the money raised in each region is spent in that same region – this is unusual for most UK charities, but rewards each area for the fundraising they deliver. "If we have a committee in Norfolk, the money it raises is spent in Norfolk," says Gillard. "Regional volunteers are important to us, and a local spend gives them ownership and empowers them. They get very involved from start to finish. Although we’re a national charity, we’re helping local communities across the country." 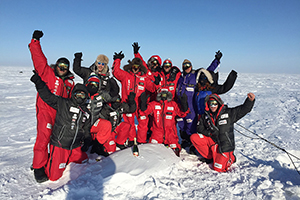 A total of £200,000 has been raised so far and the fundraising is continuing; the writer JK Rowling donated £5,000 towards their £300,000 fundraising target and the Arctic Challengers raised awareness of their efforts by asking celebrities to post "bobble-hat selfies" on Twitter. Famous names including the former footballer Michael Owen, the explorer Sir Ranulph Fiennes, the rugby union star Danny Cipriani and the rugby union England captain Chris Robshaw obliged.

BT MyDonate was an obvious choice for the Arctic Challenge team, says Gillard. "It was the fact that it doesn’t take any commission that sold us straight away," she says. "The difference is phenomenal."