The coalition of advocacy groups has launched a Facebook app to raise awareness of hepatitis, and is asking people to tweet photos of themselves performing the actions to the "three wise monkeys" proverb - see no evil, hear no evil, speak no evil

The app, which is available free at the Facebook store, reveals the 11 Facebook friends that interact with you the most. The results are then displayed in a jigsaw with the 12th and final piece missing, highlighting that one in 12 people worldwide are affected by the potentially fatal disease.

Why is the World Hepatitis Alliance doing the campaign? 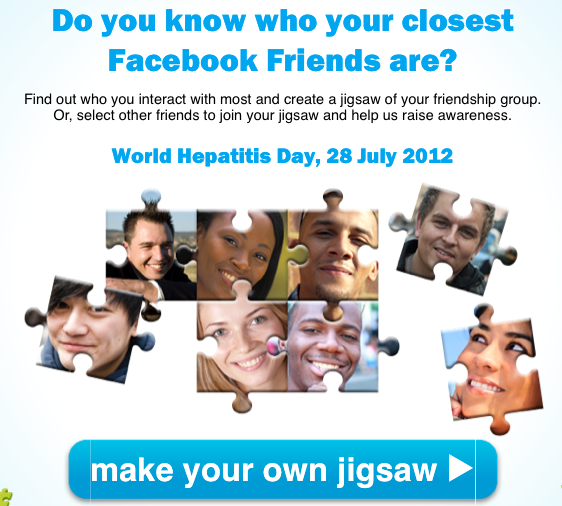 "We’re urging people to use and share this app to raise awareness of a much more serious issue – the fact that hepatitis is closer to you than you think," says Charles Gore, president of the World Hepatitis Alliance. "500 million people are infected with this disease and most of those people have no idea that they have it."

Awareness of viral hepatitis remains inexplicably low. If left untreated and unmanaged, hepatitis B or C can lead to advanced liver scarring as well as other complications, including liver cancer or liver failure. The disease kills a million people each year.

The app was launched to mark World Hepatitis Day, which was celebrated on 28 July and is one of only four official world disease awareness days endorsed by the World Health Organisation.

As part of the wider digital campaign around the day, the World Hepatitis Alliance has also launched a Twitter campaign using the hashtag #seehearspeakno, which asks users to tweet a photo of themselves performing the actions to the "three wise monkeys" proverb (see no evil, hear no evil, speak no evil). This refers to those who deal with problems by refusing to acknowledge them.

Several celebrities have so far joined the global campaign by tweeting pictures – they include Sadie Frost, Fatboy Slim and Boy George.

Once users tweet their photos to #seehearspeakno, they appear in a gallery and can be viewed by the public. Original tweets are posted alongside each photo, allowing conversations to begin.

Who’s behind the app?

The app was created by Red Door Communications on behalf of the World Hepatitis Alliance.

This Facebook app really shows how many people are affected by the disease by using the friends of people on the social network to put it into perspective. The #seehearspeakno gallery is also a great way of getting people to post fun photos of themselves and encourage friends to get involved.